Usefulness of Art (in America) 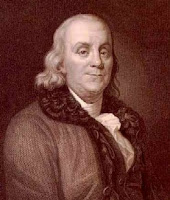 "Words may show a man's wit but actions his meaning." (Benjamin Franklin)
Having had over one year to ponder the request, John McCain finally issued a statement outlining his platform on Arts in America (at a whopping four sentences long). By contrast, Barack Obama issued a much more comprehensive platform about one year ago, outlining 8 areas he would address as president.
The results...

"John McCain believes that arts education can play a vital role fostering creativity and expression. He is a strong believer in empowering local school districts to establish priorities based on the needs of local schools and school districts. Schools receiving federal funds for education must be held accountable for providing a quality education in basic subjects critical to ensuring students are prepared to compete and succeed in the global economy. Where these local priorities allow, he believes investing in arts education can play a role in nurturing the creativity of expression so vital to the health of our cultural life and providing a means of creative expression for young people."

"Reinvest in Arts Education: To remain competitive in the global economy, America needs to reinvigorate the kind of creativity and innovation that has made this country great. To do so, we must nourish our children's creative skills. In addition to giving our children the science and math skills they need to compete in the new global context, we should also encourage the ability to think creatively that comes from a meaningful arts education. Unfortunately, many school districts are cutting instructional time for art and music education. Barack Obama believes that the arts should be a central part of effective teaching and learning. The Chairman of the National Endowment for the Arts recently said "The purpose of arts education is not to produce more artists, though that is a byproduct. The real purpose of arts education is to create complete human beings capable of leading successful and productive lives in a free society." To support greater arts education, Obama will: (read more)

John McCain's statement shows such a disregard for the arts as an entity worthy of governmental support, that it's futile to be shocked by it, or even react to it. It doesn't address arts funding, only a meager argument for the continuation of (state-level) arts education funding in schools. Obama's statement is something one can react to...
What concerns me most about Obama's statement is a need to talk about art in any other context than what it actual is, namely the act of painting pictures, organizing sounds, taking photographs, aestheticizing movements of the body, or writing words (something Obama deeply understands, as Ryan Lizza of the New Yorker said, "he's a lawyer by profession, but a writer by calling").

Many subjects are taboo in contemporary political discourse, one rarely hears either candidate mentioning the poor, Progressives are as taboo a subject in this election as transvestites, cheese-eaters, or former members of the Black Panthers, as they are all clumped into a conglomerate of the effete coastal liberals. Art as an entity unto itself is not a discussion in American politics. Only when it can be translated into economic terms:

According to the Americans for the Arts Action Fund, the organization that first requested the policy statements from both candidates, artists and art-related nonprofits generate about $166.2 billion in revenue per year and $12.6 billion in annual taxes. That makes those employed or interested in the creative economy a possibly powerful voting bloc with which which to reckon.

or into offering a supplement to childrens' education:

To remain competitive in the global economy, America needs to reinvigorate the kind of creativity and innovation that has made this country great. To do so, we must nourish our children's creative skills. In addition to giving our children the science and math skills they need to compete in the new global context, we should also encourage the ability to think creatively that comes from a meaningful arts education. (Obama Platform)

can artistic activity be politically worthy of discussion.

Historically speaking, Americans are a pragmatic people with a low level of tolerance for artistic fancies, for art that serves no definable purpose other than enlivening the recipient. Art in America has most often been associated with the emasculated and over-refined, a by-product of rotted-out and disintegrating European civilization. Art needs to be useful to be justifiable. "Art is man's expression of his joy in labor". (Henry Kissinger). "To affect the quality of the day, that is the highest of arts." (Henry David Thoreau)

A question among many of my artist friends and colleagues is whether art actually needs be discussed in a political context, or supported by governmental agencies. I say: "yes. Yes. YES. It does." Artists in America spend too much of their time justifying their very existence. That often takes the wind out of the sail for spending time on strengthening and deepening their messages, views, visions and techniques. I've lived long enough in a society that has a long history of and commitment to public funding for the arts (on a national level- Germany, as well as local- Berlin) , and think this model of state sponsorship of the arts, when not abused, is necessary in keeping arts on the radar-system of contemporary culture, and helping artists earn a societal respect and recognition for their work in relation to the energy, thought, reflection and sacrifice they put into it.

It comes back to a terribly unrelenting thought I inevitably encounter whenever I step foot in the US, namely "Am I doing something with my life that is contributing to society?" This thought mysteriously vanishes when I get back to Berlin. There are certain professions that I would count as essential to the livelihood of society- farmers, doctors, trash collectors, mid-wives, and undertakers among others. As for the rest of us, we belong to a not-absolutely-essential-to-the-functioning-of-society collective. Who's to say that a person who thrills us by a gripping use of the human body in urgently telling a story has less societal worth than a guy who sells ads for millions of dollars subliminally convincing people to buy stuff they don't actually need?

To end with, two fun quotes by the lovable but sometimes exasperating curmudgeon, Mark Twain, on Art: 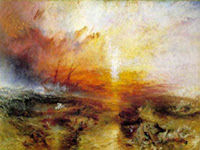 Twain described JMW Turner's Slavers Throwing Overboard as a "a tortoiseshell cat having a fit in a plate of tomatoes."

"It is a gratification to me to know that I am ignorant of art, and ignorant also of surgery. Because people who understand art find nothing in pictures but blemishes, and surgeons and anatomists see no beautiful women in all their lives, but only a ghastly stack of bones with Latin names to them, and a network of nerves and muscles and tissues."
Posted by ... at 2:46 AM