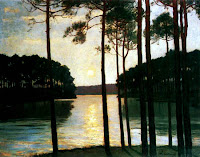 A good definition of practicing would be simply «looking for Honest Sounds».

When the finger meets the key in the right way, one that corresponds exactly to the desired mental image of the sound, an unmistakable certainty arises that this sound is the one that justifies the intention. This might only happen only after years of effort (as in my case of the first chords in Debussy’s Reflets dans l’eau), perpetually admitting that the tones aren’t at this particular point really speaking, but always trying to get closer to their essence - an immensely frustrating and hair-splitting process. I’ve been enjoying a small breakthrough in being able to realize a certain intention that I’ve been looking for for a long time. This kind of breakthrough always brings with it a certain euphoria and is a wonderful vindication of all of the baffling effort that goes into the seemingly autistic attempt at spending a lifetime getting the keys to go down in just the right way.

A book that is almost always present on my horizon in regard to piano playing is «Zen in the Art of Archery». A lot of pianists have found meaning in this book, most notably Claudio Arrau, the teacher of my teacher Stephen Drury, who emphatically recommended the book. The book is concerned with the attempt of the German author, Eugene Herrigel, to learn about Zen through the practice of Archery. One part of the book I remember vividly is a struggle with the concept of not releasing the bow in order that the arrow fly off assuredly in the right direction, but instead being released by the bow at the ideal moment. The author struggled with this concept for months, maybe years, getting to a point of frustration where he concluded that he must have an imperfect concept of what his instructor meant by release, and settling for a comfortable solution of a certain wrist movement that might correspond to the instructor’s cryptic wishes, morphing the seemingly mystical concept into mere technique. He is satisfied by his clever solution, presenting it back to the instructor who watches in silence and then goes to sit on the ground with his back to the student, indicating that he was fundamentally disappointed and that the student should not try to trick him, and that he should promptly leave and not continue with his studies.

The first chords of the Debussy require a «hammerless» piano, an impossibility ; it’s an imperative that the sound comes from keys that are not struck, but released. It’s this concept that’s so infuriating not only for me, but also many of my colleagues who use this piece as an entry-point into a higher plane of pianistic sound. Any given technique (low wrist, flat fingers, for example) doesn’t go far enough into realizing what’s required for this kind of sound. I first started working on this while living in Paris, I was renting a practice room in a cavernous basement of a 16th-century building on the left-bank, five minutes from Notre Dame. The piano there was a Pleyel, a French manufacturer of which Debussy owned an upright (it was given as a gift by the company) but which Debussy never had a real affinity for (he loved the German brand Blüthner). This environment was sufficiently inspiring to get me started on a seven year on-and-off quest that is by no means exhausted in finding the «hammerless piano», it's a kind of mystical concept that I believe has a technical - so physical - solution, but the solution has to be a good one, not cheap-n-easy.

I’m intrigued by a level of deep involvement into a certain inquiry, where a seemingly mystical concept meets a technical or physical realization. This is an elusive search, one is just as often on haplessly meandering false paths as on a path with a potential for authentic meaning. The flutist Marcel Moyse used to emphatically urge Peter Serkin (another of my teachers) to play his leading tones in a Mozart Sonata sharper (meaning, higher), something that is very possible on the flute, but absurdly impossible on the piano, unless one is very adept at whipping out a tuning wrench at the exact right moment. Moyse was asking for something that required more than a good intention, he was asking for a suspension of disbelief. This level of musicianship is where it gets interesting.


Working for « honest sounds » means constantly being present in the fullest sense, having the idea, and trying to meet it with the fingers, on a micro and macro level, in any given piece. It’s treating physically impossible intentions (hammerless piano, sharper leading-tone) as real potentials that can be met through honest and persistent searching.
Posted by ... at 3:53 PM