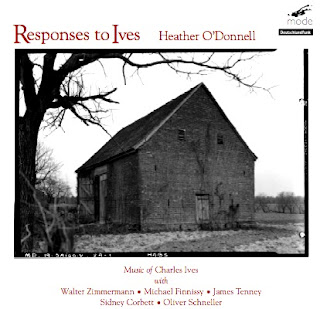 Six days from now my Ives-Cd will be released on Mode Records. Ives has been a fascination-bordering-on-obsession for much of my adult life, from the cataclysmic first hearing of the Concord Sonata at age 18 until now. I'm happy and proud to present this new CD.

An excerpt from the liner notes:

Responses to Ives, by Heather O'Donnell

The project "Responses to Ives" was conceived in 2003 as a way to acknowledge the 50th anniversary of Charles Ives's death (May 19, 2004)

The project had humble origins. I approached a handful of composers known to have strong affinities for Ives and asked them to write a "musical reflection" on the presence of Charles Ives in their lives and work. Impressed by the enthusiastic responses from these composers and encouraged by the powerful sense of identification they felt with Ives (musically and personally), I invited more composers to participate- the project grew to proportions more worthy of the composer of grand projects like the Universe Symphony or The Celestial Country, and finally premiered at the MaerzMusik Festival in Berlin in 2004 in the midst of a twelve hour extravaganza of Ives and Ives-inspired music. In the months following repeat performances took place in South Africa, China, the Czech Republic, Germany, and the US.

The issuing of the CD in the summer of 2009 presents an opportunity to speculate on the lingering presence of Charles Ives in contemporary life and culture. Ives would certainly have experienced fascination and dismay, hope and concern by our times. Perhaps the son of an old Yankee abolitionist family would have been deeply moved by the election of our first African-American president. He would have certainly had much to say about contemporary issues such as the endangering of our natural environment, globalism, the erosion of basic constitutional principles, a non-regulated free market, military ostentatiousness and preemptive doctrines, as well as irresponsibility and rampant greed in business culture. He may have been fascinated by the Information Age with its democratizing implications and educational potentials, and would have certainly had at least one remedy for his involuntary artistic isolation in having a MySpace page.

The task of trying to sum up a soul as magnificently and maddeningly varied, conflicted, and all-encompassing as Charles Ives can be daunting and often leads to painfully shallow and incomplete caricatures of the man and his outward eccentricities. Enough attention has been allocated to the image of a Yankee crank with a spiteful tongue and explosive temperament, this writer prefers to focus more on the mystical pragmatist in Ives, the enormously successful insurance executive who cared to spend his free hours in the deepest searchings and strivings for a universal musical language that could serve as an awakening agent for humanity on the cusp of realizing its transcendental potential.

Charles Ives, a man who embodied the Emersonian call to self-reliance, found his voice in personal and artistic seclusion, maintained his enthusiasm for music by never subjecting it to earning his keep. Instead of scraping together a meagre subsistence as a music teacher, free-lance composer, or full-time church organist, Ives made a comfortable living in life insurance. This allowed him to devote himself to composition on weekends or holidays, free to pursue his musical imagination without needing to worry about existential issues or public taste. A deeply spiritual person capable of discerning divine elements in humble forms, Ives was divided between a spirit of generosity in supporting and encouraging fellow composers and a penchant for acidic and irascible denunciations of composers who he felt threatened by. He was a beautifully and brazenly flawed man who had little concern for reaching the sterile perfection of classical form, but instead strove with great zeal and untiring investment towards the dizzyingly ambitious aim of reflecting through music a totality of human experience, divine and profane. Ives lived Transcendentalist ideals of spiritual awareness , intellectual independence and idealism. His political orientations were progressive, optimistic about human nature and the innate goodness of the majority, he was an active and exemplary citizen, sacrificing his time and health for aiding the war effort in 1918. At the same time, he maintained a watchful and critical eye on the Wilson administration. His music was also progressive, ever-expanding the tonal system within an aesthetic universe in which dissonance was an indication of strength and honesty, reflecting the motley multifariousness of life’s experiences. He effortlessly combined wildly divergent musical expressions into a unified whole, eradicating hierarchical notions of "high" as opposed to "common" music. He elevated the local to the universal, and brought universal themes back to his Yankee homestead. He began an experimentalist tradition which continues on to today by playfully challenging musical dogma in the areas of tonality, rhythm and form. He adhered to a strong and reliable inner compass of decency and virtue, and lived and worked uncompromisingly towards his ideals.

This disc is intended to be a celebration of Charles Ives, through his own works as well as reflected in the work of contemporary composers who admire and love him.